1) Disk management:
The first part of failover management is still plane old ZFS. It’s the way disks work together, how I/O is handled and how data corruption is avoided. 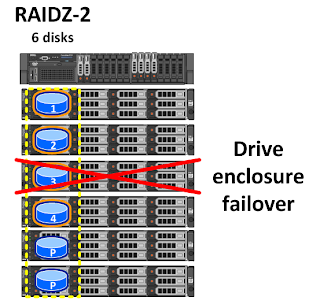 Stripes: writes are striped across all members of a vDEV, therefore the speed/bandwidth will be truncated by the slowest member. To add bandwith/IOPS, add more vDEVs. But this is for parallel IO streams! One IO stream = 1 vDEV.

RAID5 write-hole: ZFS is protected against the RAID5 write-hole because it does copy-on-write instead of read-modify-write. If in case of a power failure some blocks are not completely acknowledged (incl parity-check), nothing would have happened.

Physical disk-enclosure failover: if you design smart, you could even design for disk-enclosure failover by aligning the vDEV physical disks vertically (1 per enclosure)
2) System Scale:
The next step is in-system scale. It’s not really high availability but an equally important step in the story going forward. Because you benefit a lot by a bigger bandwith with ZFS you’d want to "scale-out" first inside your system and then go to "scale-up". Here you find a simplified example of that. 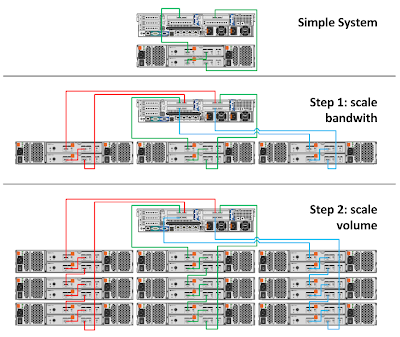 So instead of daisy chaining the 3 first nodes and then adding a second and 3rd loop I did it the other way around so you’d have 3 loops of 6Gbps SAS connectivity from the beginning.
Remark: this is a theoretical model. I would have to doublecheck with the solutions team before designing this for a customer.

1 thought on “Nexenta scale and cluster”